LEADERS IN TRANSQUEER STUDIES CAST EYE ON FUTURE OF ASIA-PACIFIC 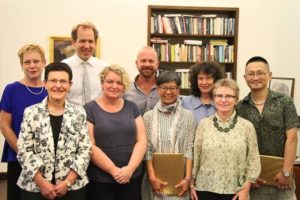 【2014.03.04 starobserver by Serkan Ozturk】
A CONFERENCE in Sydney last month heard from some of the Asia-Pacific region’s leading cultural theorists on how transqueer studies is helping break new ground on issues of sexuality, gender and transgender studies.
With a focus on transnationalism and how the studies affect established ideas of national identity, the forum held on February 13–14 attracted international leaders in the field from Hong Kong, Taiwan, Australia, New Zealand, Canada and the USA. The two-day event was co-organised by Professor Peter Jackson from ANU and drew an audience of about 80 participants.
The keynote address was given by two of the University of Sydney’s foremost cultural theorists and sociologists widely regarded as leaders in their field. Professor Meaghan Morris spoke on the theme of cultural studies as a transnational enterprise while Professor Raewyn Connell discussed the responsibility of intellectuals. Queer Studies can trace its origins to the early 1990s and to writings by theorists such as Judith Butler, which explored understandings of the complex relations between sexual and gender diversity and heteronormative power.
Associate Professor Kane Race, the Gender and Cultural Studies chair at the University of Sydney, told the Star Observer this week the event was a great way to build on the pioneering work of Professor Morris and others in developing the field of Inter-Asian Cultural Studies.
“Sexuality, queer studies, and trans studies are very live issues in the Asia-Pacific region, and all the participants are committed to thinking through these issues in locally grounded but also transnationally conversant ways,” he said.
Race — who presented a paper at the conference relating to how sex is framed by the makers and users of online hook-up dating apps — said some of the conference themes were the challenges, practicalities, pleasures and importance of having critically and culturally-informed transnational conversations.
“[Also discussed were] transnational flows of ideas and objects and their implications for sexual and trans* politics; regulatory regimes such as the censorship of the internet; migration laws and HIV prevention regimes which marginalise or silence certain sexual cultures and subjects,” Race said.
Another key theme to emerge was that the lives of trans* people in the Asia-Pacific region, including countries such as Australia, were still largely encumbered by conditions of basic survival such as a lack of employment opportunities and access to appropriate health care and welfare as well as experiences of police violence; although this was not true of all nations.
“The increasingly visible participation of trans* and queer individuals in marginal religious practices and spaces of public life in Thailand; the operation of marriage laws in Hong Kong as they impact representations of trans* lives; and queer experiments in communal living that have taken place in various locations internationally [were looked at],” Race said.
The occasion also served as an opportune moment for the Department of Gender and Cultural Studies at the University of Sydney to sign a memorandum of understanding with the Centre for Sexuality Studies at the National Central University of Taiwan. The Centre is known for its influential interventions into the politics of gender and sexuality in Asia.
“We are planning a number of collaborative projects together including work on the politics of drug policing and HIV AIDS in the region,” Race said.